A Menopause Nurse's Journey Through (Peri)Menopause

An exploration of a gynae nurse’s journey through peri(menopause)

As a woman, I knew what to expect during the peri-menopause, my husband knew pretty much what to expect and my teenage kids are aware of what the menopause transition can bring! It helped that for the last 19 years I had been a Gynaecology Nurse and for the last 10 years specialising in menopause and menstrual disorders, lucky me!

Being a woman of a certain age I have many female friends who are also of a certain age, all now talking about this life transition they are going through.  We (my friends and I) have been talking about ‘menopause’ for many years, mainly due to my job, but I’ve told many of them that they’re probably peri-menopausal with the symptoms they’ve been having.  I think they were in denial about this ‘second puberty’ as I call it, not wanting to admit that they’re ageing, still wanting to be weekend rockstars!  But things have changed recently.  Most likely due to the publicity on menopause, but definitely since they watched the Davina McCall documentaries.

When I listen to them talk about menopause now, it can feel like a bit of a competition: who has the most hot flushes, who has the lowest libido, who needs a nanna nap in the afternoon. Nevertheless, a couple of them have struggled with coming to terms with what their symptoms are, what it means, and acknowledging that this is ‘peri-menopause’.  Meanwhile, others realised quite quickly that they don’t need to put up with the hot flushes, have seen their GP, and have gotten a prescription.  Others chose a less drastic option, and  spent time and money on nutritionists, practising meditation and mindfulness and are embracing their changes differently.

The one common theme we all have is a male partner.  I ran into one of the husbands recently (we girls had planned a weekend away).  He commented on how lucky I was (sarcastically) on spending a weekend away with a bunch of menopausal mad women!  ‘A busman’s holiday’ for me I thought!

What do men know about ‘Menopause’?

Do you want to find out more about what men need to know about menopause and why? Click HERE

So I learned how to create a ‘Survey Monkey’ and sent it round to about 30 ‘women of a certain age’ that I know and asked them to kindly pass it on to their male partners.  Pretty much all of these women have asked me for advice about menopause at some point in the last 2 years or so, so I can assume they are all ‘peri or postmenopausal’.  Surprisingly, only 13 of them engaged their partners to fill in the survey.  Is it that they didn’t want their other half to know? Maybe it was embarrassing for them to ask?  Or did they think their male partner wouldn’t be interested?  Who knows…

Anyway, the survey was completely anonymous, there were a few cheeky comments but all in all the men seemed to know some stuff about menopause.

Here’s what the results show: 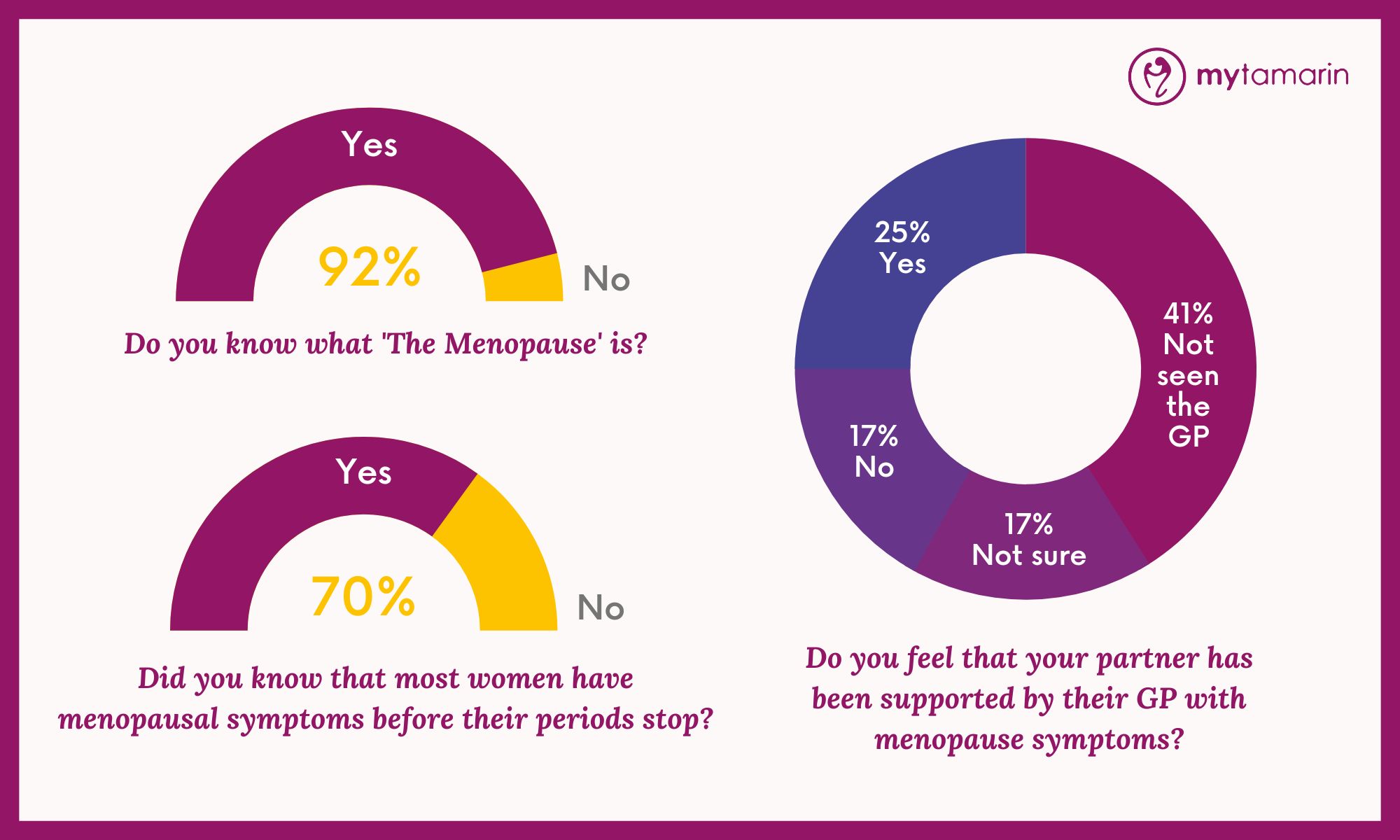 When asked if they felt their partner had been supported by their GP with her menopause symptoms, 12 answered the question:

3 (25%) said their partner had been supported by their GP.

2 (17%) said their partner had not been supported by their GP.

The men were then asked to state if they knew that the following can be symptoms of menopause, all 13 responded, here’s how they answered: 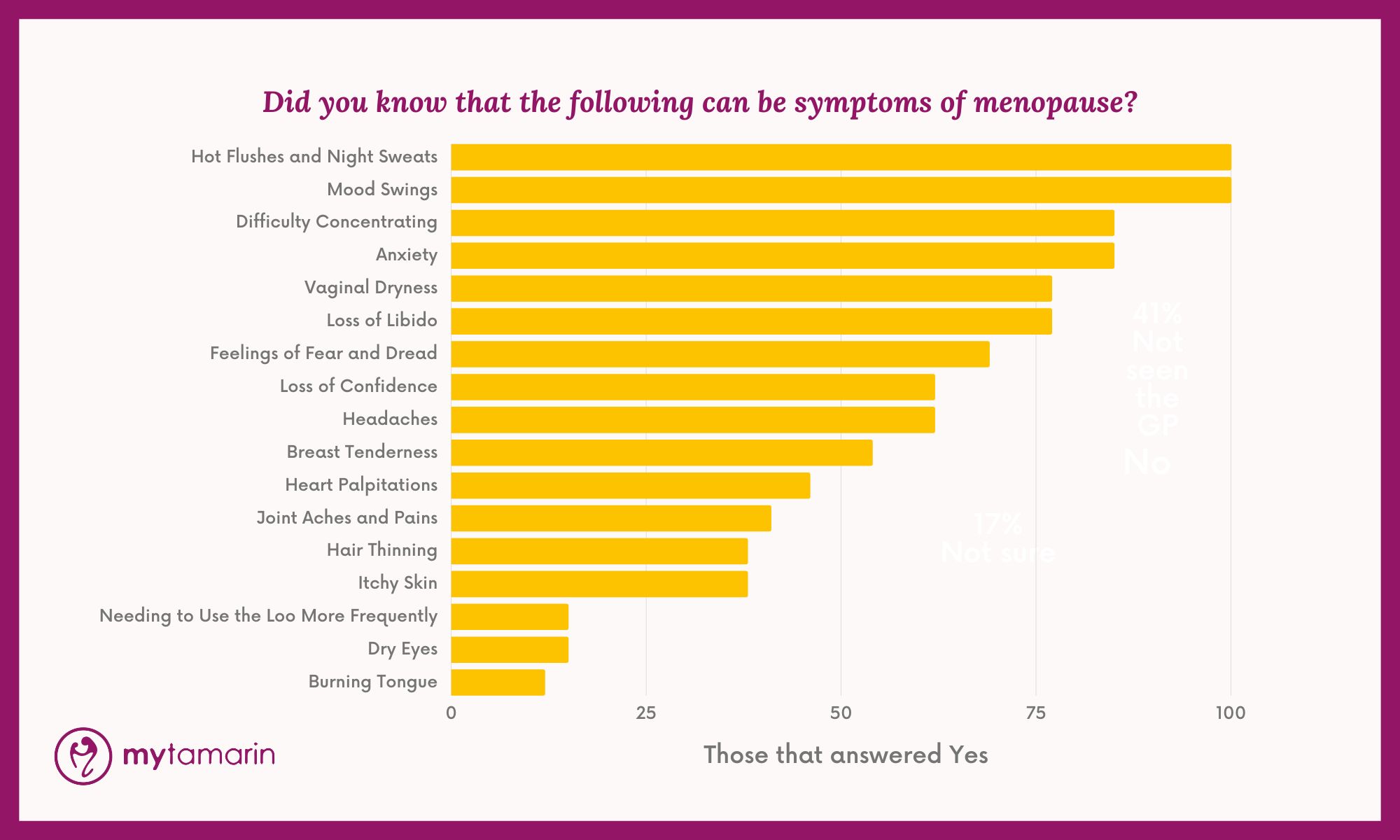 I asked what topic the men would be most interested in reading about menopause.  I listed some topics with an option for them to add their own thoughts.

They wanted more information on:

In summary, almost all of the men knew what ‘menopause’ is. The men seemed to know a bit about what symptoms could be associated with menopause, the main ones being hot flushes/sweats and mood swings which are what most people associate with menopause. But a lot of them also knew about vaginal dryness and issues with sex!

It was surprising to see that most did not feel that their partner was prepared for the menopause transition. Is it because women haven’t had enough information beforehand?  Maybe their own mothers never spoke about it? Or certainly in some cultures, it is still taboo.  Most of the men had had a conversation with their partners about menopause which is really positive but only 2 had spoken to their friends about it.  They felt there is a lack of information out there for them.  So how can we change this?

Check out our Menopause content, which contains information specifically for men to read, and covers the issues raised in this survey:

How to support your partner through the menopause

How HRT can help with menopause symptoms

How to speak to your staff and colleagues about menopause sensitively

Sex and the menopause

Menopause 101 - the basics, such as symptoms

Anxiety can quickly set in once menopause starts, menopause can be a very confusing transitional period despite it being completely natural. Here are some top tips for managing anxiety caused by menopause.

Supporting Your Female Colleagues Through Menopause

Understanding what your female colleagues could be going through during menopause is a simple, yet impactful first step in supporting them through it.

Life’s complicated - after navigating the challenging realm of childcare and parenting, you’d think women would be home free, but then the menopause hits. Numerous studies have shown that menopause symptoms can have a severe impact on attendance and performance at work.

What is Menopause Exactly?

Stay up to date on all things about childcare.